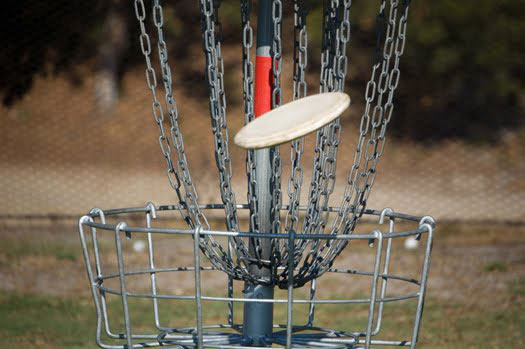 When talking with someone about the campus here at UW-Parkside, a lot of times people will bring up the disc golf courses around the area. This is because the campus here in Somers is widely known as one of the best in the area for the rising sport of disc golf.

Disc golf is a popular hobby here at UW-Parkside, and the disc golf club is one that continues to grow each year.

One of the club’s leaders, Justin Van Ee, has been with the club for three years now after his brother’s involvement peaked his interest. Van Ee described that the club is not only about playing the game, but improving the campus as well. “The club is dedicated to improving the campus and community through the promoting, teaching and playing of disc golf.” Van Ee told the Ranger News.

Above all else though, the club is always itching to sneak a few rounds in whenever they can. Van Ee explained when asked how often the club members play by saying that “during intramural season and the indoor putting league, we are playing together each week. If the weather is nice, members of the club are always getting together for a quick round between classes. Many members play almost daily if the weather is favorable.”

Get in on the fun

The club ran a free tournament last year that saw around 50 students participate and will be running one this year as well. The club will be hosting a free college disc golf tournament that is open to all UW-Parkside students as well as disc golf teams from other Wisconsin colleges. Currently, the Parkside club is working with the disc golf clubs at Platteville, Madison and Stout to get a competitive circuit of annual tournaments.

Many benefits of joining

There are many great benefits to joining the disc golf club that students should take advantage of. Players have the opportunity to learn a fun, easy-to-enjoy game, meet new students here at UW-Parkside and even from other schools and take in the beautiful nature scenery that the course is held on. Players also have the chance to win prizes in tournaments and represent UW-Parkside on a national level.

How to get involved

Anyone interested in joining the Disc Golf Club can contact Justin Van Ee at vanee002@rangers.uwp.edu or find them on Campus Connect. Also, students can attend a round of golf at anytime when the players meet on Fridays at 2:00 p.m., at hole No.1 of UW-Parkside’s disc golf course.