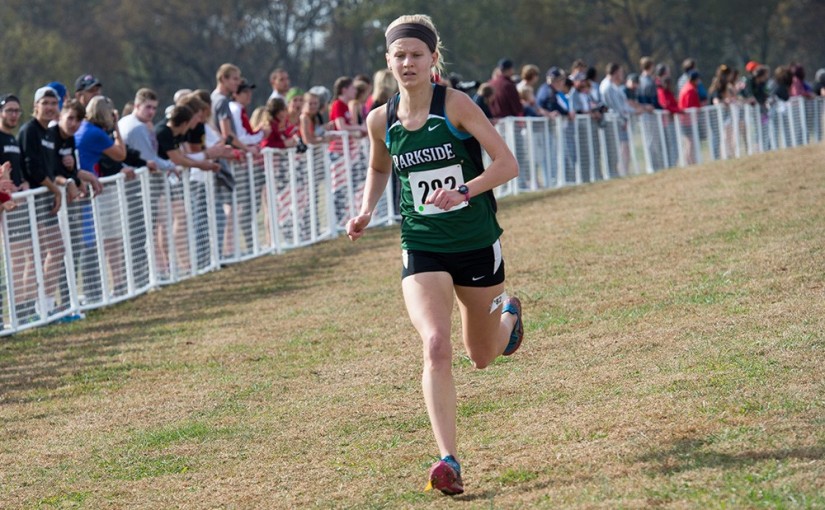 If you haven’t heard of Moriah Palmer around campus, you may want to take note of her because when it comes to cross country, she is the one to beat. Cross country coach, Thomas Breitbach, has given heavy praise to the senior runner and has called her the team’s top performer.

Praise from the coach

The praise goes both ways because Palmer is very grateful to have so much support from her coach. Palmer says that “having such great support from coach is everything. It’s important that coach and athlete support each other. We believe in his training methods and he believes in our running.” Palmer recently won UW-Parkside’s final home meet of the season by nearly one full minute ahead of the competition. She has also earned two separate All-American honors during the 2015-16 season.

Although she has been running track since her sophomore year of high school, Palmer has never thought of herself as a vocal leader on the team. Palmer instead likes to let her work do the talking. She claims, “I’m not a loud or outspoken person. I’m more of a lead by example kind of person.” When asked why she continued on to UW-Parkside, she said, “I picked Parkside because I really liked the campus. It offers a variety of places to run(xc course, bike path, parks, roads, trails) and because it isn’t too far from home.”

On October 22, Palmer earned All-Conference honors while leading the Rangers to a fourth place finish in the 2016 Great Lakes Valley Cross Country Championship. It was Palmer’s third consecutive All-Conference honor out of her four years running at UW-Parkside. She finished the six kilometer course in a total of 21 minutes and 33.06 seconds.

The cross country team has high expectations for the regional tournament starting on November 5, and their eyes are directly on the prize. The Ranger runner’s goal is to make it to nationals, but Palmer has some personal goals of her own that she would like to meet. She says,“My goal is to place top 5 and break 21 minutes in the 6k and by the end of the season earn another All-American honor.” If there is anyone that can do it, Palmer is the one.