Photo cuts: The painting of the forest is The Old Ones. Oil on canvas, 2003.

The painting of Jesus is Eloi, Eloi, lama sabachtani! Oil on canvas, 2015.

Major works by an award-winning artist from southeast Wisconsin appear for the next few months in the Fine Arts Gallery.

Thomas P. Curtis’ works have appeared around the nation and garnered many awards.  And now UW-Parkside has had the pleasure of showcasing his works.

Anyone looking to fill time with some contemplative viewing between a busy schedule will find a chance for deep reflection at the UW-Parkside Fine Arts gallery.

“I wanted to do a crucifixion scene with a message for today … with historical accuracy,”
Curtis wrote in a statement that accompanies the painting. “Unlike most such scenes, the walls are visible in my painting.”

Taking place directly outside of the walls of Jerusalem in order to make the crucifixion visible to all, the crowd of people standing in front of him show varying degrees of actions. Some grieve, while others variously offer prayers and jeers, but a good amount of ambivalent onlookers in the foreground. 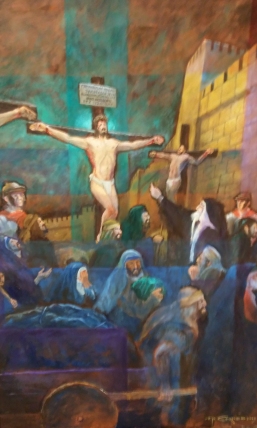 “Most are indifferent … just like today,” according to Curtis’ statement.

Adding to this mirror for the current time, Curtis employs color to play a definitive role in this piece: it separates the crowd by what they’re doing. In fact, Curtis noted in his statement that bands of color are used to accentuate the action.

Closer attention to the piece suggests that the blue in the foreground separates the indifferent from those who mourn and heckle, which is portrayed in dark green and black.

A green aura appears solely on and near the body of Christ, which show his separation from the others, extending in a cross up from the group of people and out from his arms. This obvious play on a major symbol in Christianity shows the extent of Jesus’ sacrifice, regardless of the indifference of the onlookers.

The Old Ones, an older oil painting from 2003, portrays a landscape of a cemetery that’s contained within a forest. This one seems darker than the last, which is surprising considering Eloi, Eloi has darker content. The cemetery is obviously very old seeing as the stones are covered in moss and most seem askew.

The forest itself gives a sense of foreboding and a sense of being overwhelmed from the tall, dark trees. This gives us a feeling of hopelessness and death. Death being both foreboding and overwhelming. There is a soft mist that flows over the landscape, which plays up the dark, eerie scene set on the canvas.

According to the biographical material at the show, Curtis learned of portraiture at a young age from his mother’s studio, went on to earn an AB Degree in Architecture, and eventually studied drawing at the Corcoran School of Art and painting at Cardinal Stritch University.

For fourteen years, he was the editorial cartoonist for the Milwaukee Sentinel, for which he won a variety of awards. He also worked as an art teacher at Brookfield Academy. Through the years, he has commissioned hundreds of landscape and portrait paintings.

If you would like to see these and more of Curtis’ paintings, they will be in the Fine Arts Gallery until April 8. The room is open from 9:00 a.m. until 4p.m. on weekdays.