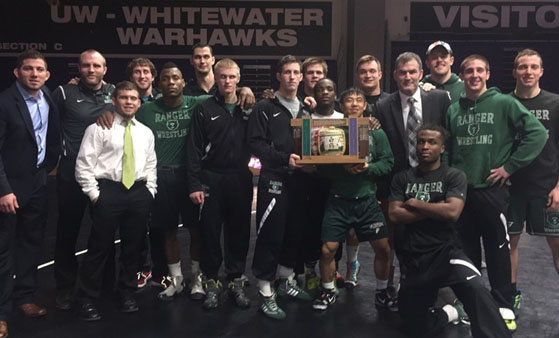 The 9-2 Parkside Rangers wrestling team has an obvious obsession. From speaking with any member of the team, be it coach or athlete, the feeling of an absolute obsession with winning a national championship is undeniable. The inescapable determination of this team comes through in everything they do.

The Rangers most recent match came on February 4th against the University of Wisconsin- Whitewater, a match which is known as the “Battle for the Sake Bottle.” The Rangers won the match in their usual dominating style by a score of 44-0. Pernevlon Sheppard, Josh Anthony, and Matt Halverson all recorded pins for the rangers.

The clear leader of this group is Coach Gregg Lewis. Coach Lewis has had a long tenure with the Rangers wrestling program for 21 years now, including five as head coach. He stresses the hard work and commitment of his team as being the reason for their success.

Lewis says, “Success is fun; these guys are having fun.” He points out the willingness of the wrestlers to put in the work in the offseason as well. Says Lewis of his athletes, “We have the right guys doing the right things with the right coaches. That makes for a nice mix.”

Coach Lewis states that he believes the team is meeting, if not exceeding in some respects, the preseason expectations for this program, and that the most pleasant part of the season has been “doing as well as we expected to do.  It’s validating what we expected.”

Coach Lewis lists some of the best leaders on a team full of leaders as being Nick Becker, Nick Fishback, Joseph Her, and Montrail Johnson.

According to Lewis, his favorite trait of this year’s team is their character and unity. “The Parkside wrestling program is a family,” says Lewis. “They’re good men; that’s the thing that makes me most proud.” This season is validation that the team is doing the right things and proof that hard work and determination pay off.

Preparation for Regional and National Tournaments

On February 26th and 27th the Rangers will participate in the NCAA Division II Super Regional Tournament. Clearly the Rangers have been doing the right things in practice all season long, so big changes aren’t needed to prepare for these significant tournaments.

Coach Lewis says that the only thing that the team is doing different is just keeping practices a little shorter to keep the athletes healthy and fresh. He still expects the team however to continue with their excellent work ethic and giving 100%.

After the regional tournament, the top four wrestlers from each weight class are able to move on to the NCAA Division II Championship Tournament on March 11th and 12th. Winning the national championship would be the coaches’ and wrestlers’ dream according to Coach Lewis. He affirms, “It would validate everything we’ve talked about as a team.”